We see it all the time on social media:  Someone posts a photo of their child sitting on their dog’s back. The child is gripping the dog’s ears with the caption, “Best of friends!”. They get tons of likes and comments about how sweet and tolerant their dog is.  Then, six months later, they post that they need to re-home or, even worse, euthanize their dog because it bit their child.  What went wrong here?

If you took a closer look at the dog in those photos, you will likely see they are looking the other way or they may be yawning or licking their nose and not looking at the child.  These behaviors are called “calming signals” and dogs use them to help prevent aggression and reduce nervousness in other dogs. They also use these signals to try and communicate that they need something from us to calm them down, or to stop doing something they really don’t like.  Unfortunately, if ignored, it can push a dog past their threshold and, as a last resort, cause them to bite.

What are some common calming signals?

What? You mean tail wagging can indicate stress? Absolutely! A wagging tail does not always indicate that your dog is happy.  If you are just arriving home from work and your dog greets you at the door with a wagging tail, that typically means your dog is happy. But what is going on around your dog should always be factored into their behavior. If your dog is sniffing on a walk with no other dogs or people around, he is probably just interested in a scent. If your dog is sniffing while a child is pulling on his fur, he is probably telling you that he really needs his space and he is uncomfortable.

The best way to avoid a dog bite in children is to never leave children alone and unattended with your furry family member. As parents, we also need to teach children early on to always be gentle and not to annoy or tease them. By knowing when your dog is trying to communicate that they need space, you can intervene and remove the dog from the stressor, preventing a potential bite. Remember, dogs (even giant breeds) can also be injured by children sitting on them or attempting to ride them like a horse. Their bodies just aren’t made to support that kind of extra weight.

Let’s always be mindful and respect their space! 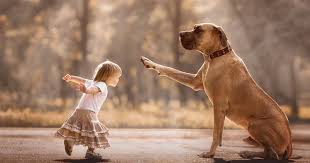